Put yourself behind a camera, filming a close shot of a lone figure. With face raw and eyes inclined, the figure firmly stationed on an obscure precipice, looks to be the center of the shot. The expression; exhilarating, the mood; thrilling.

The blushed colors of exertion are bright in contrast to the understated tones of nature. Then, the camera pans out and the lone figure appears smaller and smaller until finally you hardly notice a break in the rocky formation. 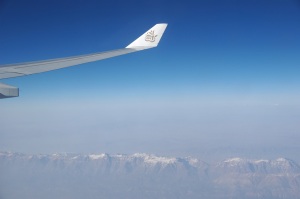 With these two lenses I take in my new station: Tegucigalpa, Honduras. I will actually quite literally find myself on a mountain, about 5 miles above the city. But I suppose I need to speak in less specific terms.

In “Don’t Waste Your Life,” John Piper writes about the differences between a telescope and a microscope, in terms of magnification. In a 1997 lecture at the Passion conference (which was ironically in Austin), Piper again cites the illustration to describe how we must magnify God. He says,

“This conference exists to light a fire in your bones and ignite a fire in your minds and in your hearts to get you ready to meet King Jesus, so that you can continue throughout all eternity doing what he created you to do, namely, to marvel at him and magnify him.”

…to marvel and magnify him. Even as I write this I can feel its challenge to the Spirit inside me. Oh, that I would get up and follow like a curious child into this marvelous light!

Piper describes magnifying with a microscope, where you see something very tiny made much larger through a lense. To do this to God, Piper says, is blaspheme. To think that God is so small that we have the capacity to make Him bigger is horribly self-absorbed and (sadly) our natural tendency. But, to magnify with a telescope is to see something that is great, immense, even beyond grasp and stand amazed. Because, though we see the stars as pinpoints, we know that they are part of something gloriously enormous.

So, as I think about the first excitement of the Lord’s leading I see the temptation to think singularly – to dwell in a world Caroline-centered. But, by God’s grace the camera pans out! The scene changes and I dissolve into the landscape. The mountain is no longer my backdrop, but I its humble visitor.

I am deep in the midst of sharing the news, writing letters, making phone calls, thinking about what I am choosing and what I am leaving behind. Oh, that I would misplace my microscope and in its place see the universe in light of the Masterful work of the Living God.

I think, maybe for a moment, today I saw this sight. And that’s why Wednesdays are for REJOICING!

One thought on “Wednesdays are for REJOICING”