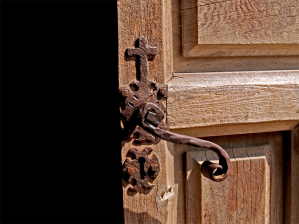 The day that Caroline was stranded on a mountaintop, I was safe in little Des Moines, IA. Even though I was safe and sound, I was also stranded like my sister.

Why? You say. How could this be? Well, let’s travel back a week. Our church is sponsoring one of the biggest bands in Christian music, Starfield. The Student Ministries team (some of the coolest folks I know) split up the city to head to big churches in the area to chat with them about the concert and invite their youth groups to the concert. We headed to the first church, (Kudos, Johnston E Free!) which wasn’t hard to find, and friendly folks were inside, so we briefly chatted, gave them the poster, and headed to the next place.

This is when some problems arose. As we canvassed different churches around Des Moines, we realized that getting into churches is easier said than done. We pulled into one church, and since there were two cars in the parking lot, we assumed at least a few people were working. But we tried every door around the place, and from the locked doors all around, we thought, “Well, this church must be locked on Mondays!”

So we moved onto the next church, confused about a church shutting down for a day of the week, but alternatively feeling a little jealous that our church didn’t have the same day-after-worship-day perks. With the next church we got super lost, so after 40 minutes I finally *411-ed it and they gave us directions to their house of worship. After kicking ourselves for not seeing it before, we headed in that direction. When we got there, though, the front doors, again, were locked and windows dark! How could this be? We JUST talked to a nice lady on the phone who gave us directions! Since I had (wisely) had a text message of the number sent to my phone, I called the church again. They said of course we’re open! All the doors on the back side are open! Hmm. back doors? Ok! We found our way in and gave them the materials, happy to have found our way into a church, to speak with a human inside. We thought, if this church, with locked doors and dark windows, had people inside, maybe the last church did too? So I *411-ed that church as well and what do you know! That church was open too! If you call having to enter in through the side door and pushing a small black button to buzz the office, “open.”

My goodness! So we thankfully gave the info to that nice lady as well, and moved on. Our next church was, of course, dark and locked as well. By this time we were fed up. If there were people in there, we were getting to them. We walked around the entire church, banging on doors and trying to raise the reclusive workers inside. As we were about to give up and walk away, a nice guy surprisingly opens the front door, answering our door pounding plea. We give him the poster and move on.