Many of you are probably already aware of the situation here in Honduras. If not, please read as much as you can from as many news sources as you can (preferably some in Spanish) so you can understand the fullest story. I don’t want to re-hash what you can read in reliable news sources (see: http://www.online.wsj.com), but I would like to share some pictures I’ve gathered from the internet and the news sources I’m reading/consolidating to get my information. 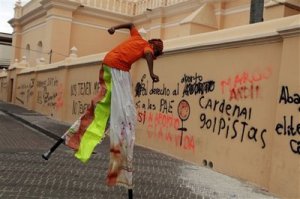 Before all of the chaos of Mel’s return, graffiti and demonstrations were the extent of tensions here. After his arrival, the graffiti/demonstrations have climbed to extremes and so have the tensions.

This is an example of what some of the Mel supporters (La Resistencia) are doing on the streets. Mel’s return, he rallied his supporters outside the Brazilian Embassy with the words, “I am here for the restoration of democracy,” which I think should seem strange to many people, because it is exactly democracy that calls him to account for illegal acts. He also said, “From now on, nobody gets us out of here again, so our position is homeland, restitution, or death.” Apparently, he is prepared to die in an effort to again become president of this country. I wonder what good that would do us – a very determined and a very convicted, dead president.

The police, admittedly a rough lot, have united with the military to try to contain the violent protestors. They are using tear gas and water cannons (at least that is all that is being reported) to keep vandalism and violence at bay. Though we would hope the military has only the best interest of the common citizen in mind, it is likely they too have their own agenda and methods to end the unrest. Some of the Resistencia seem to have little care for who their actions effect. USAToday reported that some protestors stormed an ambulance and attacked three Red Cross workers, accusing them of being part of the coup. Meanwhile, the UN delivered hot dogs to Zelaya and supporters inside the Brazilian Embassy (msnbc reports) because, of course, nothing else was available in a city under curfew.

On Monday, the city of Tegucigalpa began this curfew (which basically means we are confined to our houses under the threat of being detained by military if we leave) at 4 pm. Originally, the curfew was to be imposed until the next morning at 7 am. On Tuesday the curfew was extended to 6 pm that night and then until the next morning. We were reading as many reports as possible when we could get an internet signal, as we do not have cable, and in one report I read that Honduras is losing $50 million every day its citizens are not allowed to work.

Though Emily and I live in the city (and within 7-10 minutes walking from the Brazilian Embassy), our neighborhood has been very quiet. We learn about the riots from friends who call worried about us and our location. We were somewhat skeptical of their reports until on Wednesday we were allowed out for a window of time in order to get groceries and visit the pharmacies. As we drove around the city – with the rest of the curfew-abiding citizens – we were surprised at the patience (at times) combined with fear we saw in the people.

(One of my students took this picture in a local grocery store, where her family had gone to get the necessities for an undetermined amount of time. The store ran out of sugar, eggs, bread, and all the staples and the people were starting to get in a frenzy. When the cart came with bread, the shoppers became out of control and people were crazy to secure a loaf.)

We later learned that Mel supporters had not only stormed several grocery stores in the previous nights (where curfew was imposed), but left them vandalized with broken windows and nothing on the shelves. They even went to the extremes of digging up rocks on the cobblestone street to throw at cars parked on the streets and in parking lots. They moved on to gas stations and fast food restaurants as well, even taking the little money collection bottles at the counter intended for “Kids with Cancer.” (Cadena Nacional – a local news station reported this with footage I cannot find) 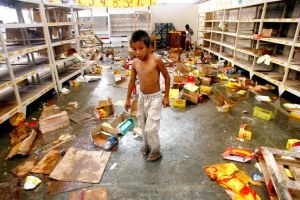 Originally, we believed the government released us from the curfew because it would be extended (and the nightly news then reported) indefinitely after we secured food and medicines. Now, however, we speculate that we were encouraged to get groceries because of the irrational nature of the Resistencia. We woke up this morning, Thursday, and the curfew was not extended. Though this was a surprise, the only reason we can see is that those of us acknowledging the curfew were not the people making trouble. The mob of protestors who ignored the imposed curfew was only growing and the problems were increasing the past couple nights. The government wanted us to have access to groceries before the mob stormed more grocery stores and made more chaos in the streets (that’s our guess).

Though I’m sure I do not understand the whole ordeal, I do know that Zelaya is being encouraged by what he calls the “international community,” basically Venezuela, United States, Brazil, and Nicaragua. However, without the support of the United States, many speculate the Zelaya’s return (commended as valiant by Hugo Chavez) would not have been possible. As the Wall Street Journal reports, the persistence of Obama, Clinton, and other international leaders to bring Zelaya back into power is absurd if not embarrassing. Though an official, current Honduran Constitution is hard to come by, we do know that Zelaya’s actions warranted a response. The response his Congress chose, though it may not have been best, may have been one of few options. And, now that we see the tension and unrest resulting from Zelaya’s presence here, we might more fully understand their desire to have him exiled.

Reports today from Bloomberg.com say Zelaya is now telling supporters that he knows of a plan (by the current government) to storm the Brazilian Embassy and kill him, claiming it was a suicide. Michelletti’s office, of course, denied these claims and pointed to these extreme statemtns as Zelaya’s methods to incite the mob.

I could go on and on, but I encourage you to do your own research and then join me in prayer. Though I am definitely not in favor of Zelaya, I know there is corruption on many if not all sides in this crisis. I have friends and students who believe (though not in favor of Mel or the violent protests) the Resistance campaign is only calling for due process and adherence to the Constitution laws in full, not only when it benefits the other party. Unfortunately, this is not a crisis where we ask, “whose side are you on?” but one with complicated details that begs the question of lesser evils.

PRAY
Please pray that Christians will unite as one in prayer. Also, as we are kept from school these past three days, pray for the teachers and staff whose purpose right now can only be to remain diligent in prayer and faithful in communicating with students. Pray for the students, that they would not fear, but know of the Love that casts out all fear that comes by way of the world. Pray for the people here, who are struggling after missing days working – it hurts on every level, from business owners to the cleaning maids.

I have added links to photos and videos below.

Video in Spanish with footage from ransacked grocery stores