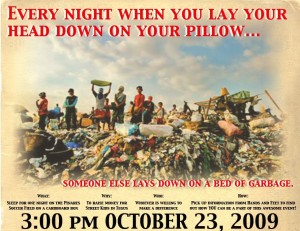 After a solid day-long hibernation yesterday, today I was ready to re-enter the world of social outings and easy conversation. But, had you tried to rouse me or engage me in any sort of way yesterday, I couldn’t have made any promises of my attentiveness.

The weeks (and months in the idea-in-my-head kind of way) leading up to Friday, October 23rd were packed with questions, preparations, and lots of battles against worry. In the course of these weeks, I felt constantly compelled to apologize with the words, “I’m a visionary.”

Sometimes (okay, many times), I look ahead to the glorious, vague notion of “what could be” and then work haphazardly toward its realization. I used to think I was organized… you know, with color-coded plans B, C, and D in proper order. I used to think if I had enough discipline and spoke with enough authority, that inner, organized leader in me would prevail. Well, come to find out, the inner, organized leader I so hoped to uncover was quite hard to find.

Now, I don’t lie to myself. Instead, I say, “I am a visionary, like my dad.” I know it doesn’t get me off the hook, but I hope that it does bring in all those around me to keep me accountable and ask the right questions.

All of that to say, being a visionary turns out to be a lot about being humble. Holding your plans loosely, holding schedules that are slippery like jello, and trusting that however it turns out is the way it was supposed to go (even if it looks nothing like what was in my head). Friday night was just exactly that – not at all what I pictured and absolutely a work of God.

Micah Project and the Transition Home (ministry of Orphanage Emmanuel) joined us in the afternoon and we spent several sweaty hours playing soccer on the field. Then we moved into the gym to several stations – prayer room, letter-writing, and learning stations. The kids (in small groups) walked into the prayer room and prayed for the Micah boys and the girls from the Transition Home by name. They wrote letters to our Congress here, explaining the purpose of the event and asking that they might concern themselves too with the needs of those living on the street. Then, they had fun with the challenges at the learning stations: creating a sculpture out of bottles and cartons, creating an outfit out of scraps of fabric, creating a game out of found objects.

We took every opportunity to teach our theme verses, from Matthew 22:37-40

We united together, as neighbors in Tegucigalpa and loved one another through playing games, making jokes, laughing, and sharing joy. Our dinner was simple: hot dog, chips, soda.

We listened to a band and then joined together in worship. The sound reverberating in the gym was pounding in my head with all my worries, but when I looked around, the unity I saw was beautiful. After the singing died down, with prayer we ushered in the presentations of the two organizations, who shared testimonies about their work with children who grew up on the streets or were saved from a childhood on the streets.

When Becca (from Micah Project) asked Wilmer and Marvincito what their dreams were for the future, their answers made a huge impact on all of us gathered. They said some version of this, “When I get older, I want to help the kids who were like me – poor and on the streets without hope.”

We prayed for the organizations, laying hands on them and then they in turn prayed for us. This exchange remains imprinted on my heart – that we are called to both give AND take as part of the body of Christ. Just as we were ready to move out onto the soccer field for the campfire, the electricity died in the gym. At that moment, walking out onto the field illumined by the fire’s glow, we were one. We were really ONE: one family, one community, one love. We crowded around the warmth of the flames and we sang. We prayed. We gave thanks. We were one.

And then we dispersed to our flimsy little cardboard beds (which quickly became a community event as well – for warmth!) for the night.

Though not all the students that came were born-again believers, I think we all got to see a little glimpse of what God might have in store for the future – worshipping, playing, loving, and enjoying life… together.

The morning came early enough and I was glad (especially for reasons of liability) that everyone made it through the night. We packed up and cleaned up and with almost every step I wanted to find a corner to collapse into. But, God be praised, I made it, too!

I will be praying for many more nights like these (and God’s power to sustain us to do His work).

One thought on “a night as ONE”