Today is so full of joy (for many reasons)!

In his first season as head coach at South Haven, our brother Samuel, will be playing his third playoff game this week. His success (in my opinion) depends greatly on his dedication to his team and the sport as a ministry. For those of you skeptical of sports and the impact that can be made there, talk to my brother. 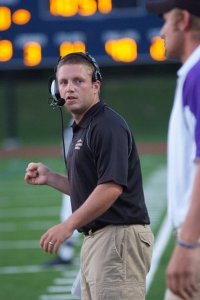 Ever since he first started taking on responsibilities at Holland Christian while still in college, his heart for reaching young men through the sport of football has impressed some of the most convincing skeptics. I remember sitting in the stands with Bethany at some of the early games (several losing seasons) and watching Samuel encourage and inspire his team. Many times after games he would be in tears.

Now, after taking his first head-coaching position, I know that his passion for the sport and the young men has only increased. I haven’t been able to talk to him much about it, but luckily the Holland Sentinel newspaper wrote a story on the upcoming game. Click here to read it!

Basically, today is one of those days my pride could burst my buttons. Congratulations, bro!